London Office Fit Out in 7 Weeks

How long does it take to complete an office fit out in London? We were able to complete all of this in a 7 week programme within budget and to the full satisfaction of our client.

Initial Interiors have recently completed the fit out of Momentum Transport Consultancy new offices in Saffron Hill EC1, working to the clients design and improving the design where possible to give better value for money and a office space that works better for the clients business.

The scope of works was quite large to consist of: 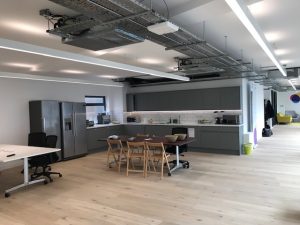 The boardroom and two meeting rooms were constructed in a line, running parallel to the existing windows, with high glazed fronts to allow natural light from the windows to spread to the open plan area. With the new door frames and doors painted to match the existing window frames of the office. 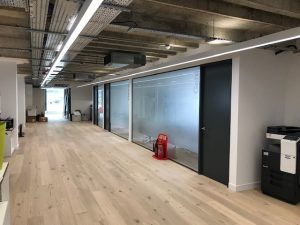 The filming of the glazed sections incorporated the names of the rooms used in their existing offices to allow continuity between their new and existing offices. Particular attention was paid to the partitions dividing the boardroom and meeting rooms to stop sound transference between them, with each room having a TV screen mounted on one wall to allow for video conferencing and a visual aid for presentations. 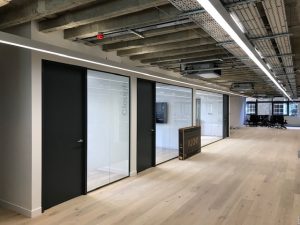 The original floorplan supplied by the client had two phone booths, although the client suggested a desire to increase the number of phone booths if possible. By working with a contractor responsible for the maintenance of the building we were able to make a small change to one of the air handling units allowing us to increase the number of phone booths to three. The three phone booths were constructed in a line parallel to an existing wall, again with high glazed fronts and doors and door frames painted to match the existing window frames of the building. Each phone booth had a workbench installed and again particular attention was paid to the dividing walls of the phone booths to stop sound transference.

Breakout Area, Tea Point and Large Kitchen for Catering up to 60

Within the clients design a large breakout area with a contemporary kitchen, and an extra tea point was specified. Within the specification 3 integral dishwashers and an integral fridge was included. As well as the integrated appliances a specific integrated hot water tap was specified for the kitchen and tea point, but after investigation it became apparent the tap wasn’t suitable for the tea point and after discussions with several manufactures the brand Billi Tap was selected as the most suitable and a tap giving instant boiling, chilled and sparkling chilled was selected for the kitchen and tea point each capable of catering up to 60 people.

The most challenging part of the project was the addition of an extra shower unit, being  involved in large infrastructure and transport projects worldwide, the client is particularly keen to support its staff in the use of green and sustainable transport such as cycling and provide them with suitable showers and changing facilities. Initially it was thought we would have to remove one toilet to be able to provide this, but with a little thought we were able to incorporate an extra shower unit without reducing the number of toilets.